The Wonka Bar is both a fictional and real bar of chocolate from Nestlé' Wonka Candy Company. In the Wonka franchise consisting of the novels and the films, the Wonka Bar is the creamiest and sweetest candy bar in the world. In the real world, Nestlé's Wonka Bar has met with mostly positive reception.

In the book, there are said to be more than 200 kinds of Wonka Bars each creamier and more delicious than any other.

The Wonka Chocolate Blocks are an Australia exclusive selection.

The Fudge Mallow bar from the 1971 film

The chocolate bar props from the 1971 film

The four Wonka bars used in the 2005 film 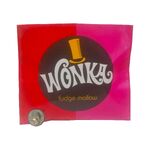 The first Wonka Bar from the 1971 Willy Wonka and the chocolate factory.

This is the 2005 Wonka bar from Charlie and the chocolate factory.
Add a photo to this gallery
Retrieved from "https://wonka.fandom.com/wiki/Wonka_Bar?oldid=6399"
Community content is available under CC-BY-SA unless otherwise noted.